Getting Started - The Pitch

So, how did this monstrosity get started? 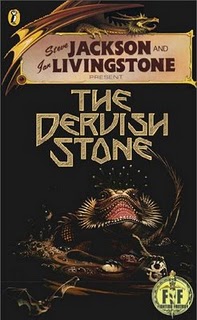 After editing and posting (available for a month only and never again) compilations edits of the various Fighting Fantasy mini adventures in April 2009 (the pic above is the cover of the first of the five editions released), it was just a small step from that to the idea of a fan magazine. So, at the end of that same April, I posted this proposal to the Titan Rebuilding Yahoo! group:

* Interview with FF writer/artist (with colour photo of person interviewed)

* Myself as overall editor + possibly interviewer. Also able to contribute some b&w art

* Per Jorner perhaps as Archive reviewer?

* Team from Titannica taking turns with articles about Titan

In a later post I then summarised the feedback I'd received:

Most think 1~2 sounds right, which is a number I'm happy with and think can be managed (I have another fanzine that comes out about that often so I have some idea of the workload involved, especially since it is 56 pages per issue). If the responsibility for the bulk of the content is spread about then it shouldn't be too difficult to put an issue together. Only 1~2 a year also means that producing a mini-ff is more likely, but also we can cut/delay a mini-ff and simply do an issue without if need be.

Here I was thinking of original art. While my mini-ff compilations are a fun exercise, for the fanzine it would be prudent to keep the contents (bar that it is based on the FF system and world) original. I'm happy to supply some of the art and thought that if it (like the text) was split between different people it would make producing it easier.

This gives roughly 53 pages. (Mini-ff estimate based on average space taken in "Warlock").

*This would presumably have the biggest workload of an issue.

All of this is currently just pie in the sky thinking, an idea I thought might be nice to try. Till people actually sit down and work out what they think they abel to do/can commit to time/effort-wise it can't really progress further. As noted, I'm happy to assemble each issue and do the overall editing, but wouldn't be able to produce the entire contents myself. I'm also willing to tackle the interviews, some art and the occasional mini-ff.

I then followed it up another post later on which had a teasing image showcasing a possible design for the cover (the image below is the revised version I posted instead of the original, as in the original the magazine was called 400 and mini adventure titled Night of the Necromancer - a title then pinched with permission by Jonathan Green): 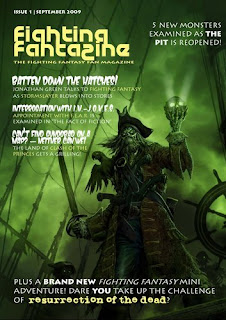